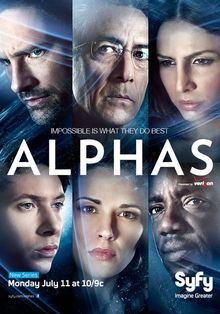 
Alphas is an action-packed thriller from writers Zak Penn (The Avengers, X-Men: The Last Stand) and Michael Karnow. In the series, five ordinary people are brought together to form one extraordinary team of Alphas — people with the unique power to stretch the capabilities of the human mind giving them superhuman physical and mental abilities.